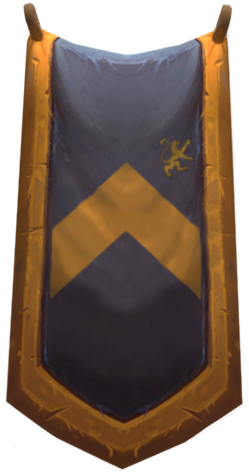 he First Regiment is a heavy role-playing guild on the Moon Guard server of World of Warcraft whose concept revolves around a Duchy within the Kingdom of Stormwind and the regiment of soldiers that hail from it. On Classic World of Warcraft, we are on the Bloodsail Buccaneers and Grobbulus servers as The Stormwind Army.

While at our core we can be defined as a military role-playing guild, we delve into non-military concepts in our stories that involve magic, the church, rangers, law, nobility and knighthood in creative plot-lines and interactions that have a great deal of fan-fiction and years of role-play history backing them.

We engage in several modes of storytelling, including Dungeons & Dragons styled roll-based events, world RP-PvP with Horde guilds, and creative interaction and conflict with Alliance guilds.

The First Regiment was founded in early February of 2010 with the goal of revolutionizing the Stormwind role-playing scene on Moon Guard and providing a high quality environment for its members. With over ten years of role-play documented through dozens of planned campaigns, the regiment stands as a testament to the dedication, creativity, and comradery between its members.

Our recruitment is currently closed to Death Knights, Night Elves, Draenei, and Pandaren. Although we have recruited them in the past, we now wish to promote the guild's roots in the races of the Eastern Kingdoms: Humans, Dwarves, Gnomes, and High Elves. We accept Worgen with the condition that they remain in Human form.

he First Regiment maintains an in-depth list of Guild Rules that every member is expected to follow in the interest of maintaining a friendly and welcoming environment for its players and a cohesive chain of command for its characters. In general, members of the first regiment must be courteous and respectful to each other and to those outside of the guild. There is absolutely no tolerance for harassment or disrupting others' role-play uninvited. Members who are found to break the rules of the guild are subject to demotion or removal depending on the severity of the offense.

If you are new to role-play, it is encouraged that you read the following documents:

To be able to complete an application to the guild, you must read the following documents:

he First Regiment is made up of several sub-organizations, or Divisions that encompass the major role-playing themes found within the Kingdom of Stormwind. Whether your character is a rogue, knight, priest or wizard, we hope to provide a unique niche where you can have fun and fulfilling role-play in which your character's skills are utilized to their fullest.

A link to these divisions is listed below with internal links to further information:

Some divisions and orders have special requirements that must be met before your character can join. If you have any questions or suggestions regarding the guild's divisions or roles, contact the guildmaster either in-game or with a Website Message.

n the First Regiment, those who display leadership, creativity, and excellent conduct are rewarded with higher rank. As the guild's concept primarily involves military action, its Ranking System reflects the regiment of the Stormwind Army that makes up the bulk of the guild. Non-military members of the guild are also given opportunity for advancement!

A link to the present ranks in the guild is provided below:

he First Regiment is known for hosting elaborate story-driven Campaigns that span the continents of Azeroth and beyond. During campaigns, the regiment "deploys" to a region of interest and centers its role-play around completing objectives in-character as a group. While most campaigns last two to three weeks, the regiment has hosted campaigns that culminated after several months of events.

The events that make up campaigns vary in means of storytelling. The first regiment has devised a system using the in-game "/roll" feature that loosely parallels concepts found in Dungeons & Dragons, where each participant acts based on their dice rolls. Some events consist of Freeform Storytelling, where participants are asked to act and react as their characters would to certain encounters. The regiment also engages in RP-PvP, where we fight against Horde players in world PvP skirmishes to determine the advancement of our stories. Often during important world events in-game, the regiment leads RP-PvE events where we fight NPCs either in the world or in dungeons or raids.

he First Regiment employs a great deal of fan-fiction in its role-play - expanding upon what official lore is available and writing our own place into Azeroth's history. While we do not expect anyone outside of our guild to acknowledge this fan-fiction, members of the first regiment are generally expected to try to incorporate the regiment's Lore into their character's histories and stories.

1.) Read Role Playing Terminology if you are new to role-playing.

4.) Fill out an application. You will most likely be directed to this website to fill out an application if you contact any member of the guild. Please copy/paste the template below into a thread titled with your character's name. Fill out the information and be as detailed and thorough as possible.

6.) Set up an in-game meeting. If your application has been accepted, you will be prompted to contact an available officer for your in-game induction. If you've met all the standards that we require for membership, your character will afterwards be offered a guild invite, given their uniform, and be welcomed to the army!

What We Look For

When your character applies to the army, it will be assumed that they literally filled out an application found in any village, city, or military outpost in Stormwind and sent it in. The questions in the assumed application are the same as those you fill out on the website. Here is an example of what such an application might look like: